brb: be right back - A verse novel 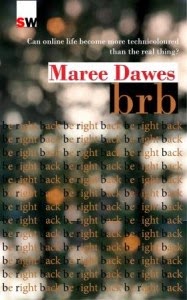 Earlier this year I was honoured to be invited to launch Maree Dawes's second book, a digital verse novel, in Albany as part of the Perth Writers Festival in the Great Southern.
Monday 24 February 2014 was a warm, sunny day. A perfect time to escape from my usual routine and join the enthusiastic crowd enjoying the program at the Vancouver Arts Centre.
The launch was a lively one, and included music from A Mixed Bag (Sandy Bishop, Sue Tevaki and Barbara Watson) and  a dramatisation of excerpts from the book by Nic Spanbrock, Tarquin Smart and Sylvia Leymann.
Congratulations, Maree and Spineless Wonders, for delivering such a great read!


I‘m delighted to be here today to launch this new title BRB: be right back written by Maree Dawes and published by Spineless Wonders.
BRB: Be Right Back ­is a verse novel, and an exciting blend of lyric and narrative poetry and cyber-discourse.
It’s the 1990s. Dawes’ protagonist, known as Boadicea, finds in online chat rooms an anonymity and freedom that liberates her from everyday life: her loneliness in a new town, responsibilities for children, her often absent partner and their unravelling relationship. In chat rooms she learns to be herself … or anyone else she chooses.
The first obstacles Boadicea encounters in chat rooms are culture and language. In order to even begin to communicate with the others there, she must undergo a kind of enculturation: become familiar with chat room etiquette, think and write faster, and be an adept of chatspeak – word strings of acronyms, abbreviations, pictograms, emoticons, etc. – which we now know as textese or sms, but brb is based in the 1990s when personal access to the Internet was still a novelty for many.
From the moment she gets naked online, Boadicea enters a world of discovery, eroticism and obsession.
This is known as delaying gratification ­– which must be terribly like cybersex, I think – I’m going to digress, because I want to talk for a moment about the verse novel and free verse.
Story has been conveyed in poetic form since the early days of spoken language, leading to the development of oral narrative poems such as the epic and the ballad. Gilgamesh, Homer’s Iliad and Odyssey – along with Beowulf - provide us with some of the earliest written examples available to us of the ancient epic tradition. From that tradition evolved a range of narrative and poetic devices, and techniques of composition that remain in common usage to this day. brb is an excellent example of how these continue to evolve.
The poet and critic Leonard Nathan, writing in The New Princeton Encyclopaedia of Poetry and Poetics (1993) (one of my bibles), traced the peaks and lows of narrative practice in poetry from the time of Homer to the present day. Rather than locating a continuity of a particular mode (or modes) of narrative poetry, Nathan found instead a continuous tradition of narrative in poetry. This tradition is peppered with works in forms that were perceived as being avant-garde at the time of their emergence and have since become classic (blank verse and free verse, for example). In recent times, this process has included not only a blending of some poetic forms with other poetic forms, but also a blending of poetry with other genres – such as the verse novel. Such hybridisation seems almost inevitable when one considers that for the last three centuries the novel has dominated narrative literature.
Free verse is a popular choice for the authors of verse novels. Poets can then concentrate more on narrative structure, as opposed to a strict-form poetic grid on which a narrative is to be suspended. Free verse, coupled with lyric poetry, can and does enhance sustained narratives, being dense with imagery, simile, and metaphor reinforced by the use of sound patterning techniques such as rhythm, alliteration, repetition, etc. In brb, Maree has put equal amounts of energy into both her poetry and her narrative.
I read an example of this: “The music teacher takes the stage” from brb.
Free verse also lends itself to writing in the vernacular, i.e. the language of a particular place, in this case cyber-space. The use of textese, colloquialisms and unusual syntax is a point of commonality shared by many of the pieces in brb, especially in dialogue. Narrative will often employ dialogue to service the plot, in the guise of establishing character, exposition, and conflict. The choice of a chat room for the central location in brb provides the perfect opportunity for Maree to employ all these techniques, and to also play with language in unconventional, entertaining and sometimes humorous ways. For example: In Welcome to Yahoo! Chat you are chatting as Boadicea voices overlay each other: “huggles”, book discussions, and cyber-relationship building are punctuated by requests from a teenager for help with his English homework.
End of digression.
In contrast to Boadicea’s domestic arrangements, life in the chat room is un-constrained. Her wholehearted engagement with the cyber-world threatens to unravel her real life, but in terms of the writing it creates new opportunities for verisimilitude, i.e. likeness to the truth.  Indeed, the cybersex encounter in “Thistlehead PMs Boadicea” proved to be most educational ... But I’m not here to provide plot spoilers!
In summary: Narrative is easy to identify because the elements of story – beginning, middle, end, character, conflict, resolution, moral, and so on – are introduced to us at a very early age. Poetic language, however, is a consciously learned, figurative language that comes to us from an ancient tradition and is constantly evolving.
I quote from the words of the Australia poet Jan Harry, who said:
“Poets thrive on thinking of writerly ways to subvert or undermine conventions; by hitching verse to novel […] there are opportunities for poets to work in new ways …” (“Narrative And Poetry: What Happened Next” Cordite, 1 February 2001)
brb; be right back is Maree Dawes working in a new way, a way that is extremely relevant to our world today. The outcome is a work which wears the robe of the novel, but speaks the language of poetry.