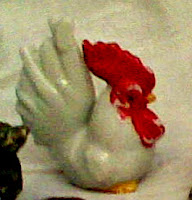 Recently, after a friend, Sarah (who has an amazing blog @ A Wine Dark Sea), experienced an attack on her flock of hens by several stray dogs, I promised her I would post my chook poems here.

The chook poems were written a long time ago. Many of them appeared in my first published collection (with Michael Heald and Roland Leach) Shorelines: three poets Fremantle Arts Centre Press, 1995 (now out of print). Before Shorelines "Mangiare alfresco" (1992), "The Thursday Fox" (1993), and "On finding white feathers" (1994) were published in the Weekend Australian back in the days when Barry Oakley was the Literary Editor there. Barry gave me one of the nicest compliments I have ever received when he said: "I just can't resist your chook poems."

"Mangiare alfresco" recently received new life when it was selected for WritingWA's "22", and "On finding white feathers" was featured in the South Perth Poetry Park (Neil McDougal Park, South Perth).

The chook poems worked their way into my life at a time when my family and I lived in the Perth hills. My writing desk was located in front of a huge window that looked out onto our backyard, a bush block, with our flock of free-range hens (and the occasional wet rooster) parading by. During that period of time we nurtured several households of chooks, loving them, and grieving for them when sickness, old-age, or fox/dog-attack decimated our flock. Valuable lessons were learned. Along with the large doses of humor that arise from sharing your life with a hoard of feathered individuals, the simple, cruel tragedies of the backyard crept into those being enacted by the larger world around us. For example, in "The Thursday Fox", the story of Bobbie Cullen, a student at Curtin University and a victim of domestic violence who died when I was pursuing studies in creative writing there, seeps into a poem about a fox attack I've never forgotten: the dark, tortured night when I, with my son, Clifton – who was only about 10 years-old at the time and very, very brave – ran blindly around in the bush trying to save our hens ahead of the fox coven committed to beheading them a step ahead of us.

Woman at Desk with Writing Space

Her writing space is in her head, sleeping,
hiding between its cotton sheets, it goes
snug in the place behind her ears and eyes.
Sometimes it’s there when she’s away: sitting
on a bench at the lake, in a clearing
in the woods, on logs in the chicken run ­–

once – amidst a herd of cows. Would it run?
It wouldn’t jump-start! She suspects sleeping
was on its mind. More commonly, clearing
its throat loudly, it is in her car. Goes
skidding around corners, sighing, sitting
frozen at stop signs. Blue lights in her eyes.

It fires over dirty dishes, its eyes
running with onion’s scent, but daily runs
leave it puffed in the driveway or sitting
exhausted in her chair. When she’s sleeping,
hand in hand with dreams - no spare room - it goes
about dusting cobwebs, firebreak clearing,

washing the floors for visitors, clearing
fog from the bathroom mirror. To its eyes,
her desk is a mess but it likes it. Goes
cursing to the landlord: its stockings run
catching on splinters from her page - sleeping
cat on cushion. Her writing space, sitting,

jumps when the phone rings, hides away, sitting
on the edge of the curtain rail, clearing
its line of sight to catch the deep-sleeping
trailer with its overflowing cat’s-eyes,
beer cans, bike tyres, junk, time for a dump run
with leaves. The rake that broke yesterday goes,

says her writing space. And as the sun goes
down, its rays highlight the paper sitting
on her desk with coffee rings. A dry run
to the chook yard with scraps, her mind clearing
ashtrays, dust from the keyboard. Her space eyes
the livestock’s feathers, ruffled from sleeping.

Out the window it goes, to the clearing,
hens sitting, scratching, blinking lidded eyes -–
writing space on the run: writer sleeping.

The boy in the paddock
down the road
has frost on his eyelashes.

His hen was paralysed, dying.
He’d placed her in the nesting box
near the morning’s eggs,
and closed her eyes
against the sunlight.
He cried on his way back through the trees –
‘Spider webs in my eyes.’

The boy is watching the henhouse –
breath, making mist, trails
through the railings of the gate.

He’s a featherbrain,
a feather duster. He’s been caught
feathering his own nest.

He’s a rooster stalking up
and down the chicken run.
Shut-in bird bedraggled by rain.

He’s stalking up and down
the fence. Black and white.
Not soft. Wet. Stringy.
Water bonds feathers to bone.

At the corner of the yard, he turns,
tail feathers, like bridal trains
behind him, duck and follow.

A parson’s nose. He’s a parson’s
nose in a baking dish
bubbling in his juices.
Crisp. Brown. Salty on the serving
dish. On the counter.
The parson’s nose. First to go.
Next, drumstick.

His huge legs stalking featherbed.
Feet, up and down in the mud, march.
Disappear. Appear. Turn.
His voice an angry buck, buck. No crow.
No breeze. Christmas kitchen dish.

The roast, the hot, hungry
trace of basting Buff Orpington.

He stalks, walks like a Sergeant Major,
round and round the chopping block,
around the axe.

In the corner of the shed,
my favourite: a small, white Silky hen -
found in a nest of wings and straw -
quite dead.

She was a good breeder.
I relied on her
to increase the flock,
now she’s decreased it - by one.
She’s the fourth this week.

I’ve lost an English Game Cock,
a Bantam and a Plymouth Rock
crossed with something else.
Some days there is a body,
sometimes none.

A hole under the fence
of the chicken yard
can mean one more in my garden,
I am making compost with feathers.

I’ve closed their door for the night,
a log, new-felled, pressed firmly against it.
I stack rocks around the wire
jamming my hand between them,
lose skin, bleed.

Loss pierces my swelling thumb –
it is sharp as the swift yellow beak
of a small, white hen hoarding eggs.


The Thursday Fox
for Bobbie Cullen

The rubbish truck’s late again. It’s Thursday.
A fox has breakfasted on the hens. Eggs
and laying pellets combined, a kind of
hybrid omelette on the floor of the coop.
And the garbage bags, Glad, on the road verge
are full of headless chickens, and I hate

the way the fence collects loose feathers, hate
hens for losing their heads on a Thursday.
Midday, and I wash dishes on the verge
of tears. Outside: cat, striped yolk-yellow egg-
white, with magpie carnivals from tree. Coop’s
so empty. Their shadows blend, a kind of

melting: the bird, the cat, the wire, and of
steam, dishwater, window rivulets. Hate
the way soapsuds dry my skin, my flesh cooped
up, this body-house. Rubbish, next Thursday,
will be dull compared to this – fertile eggs
and guillotined bodies wait on the verge,

and will I know what’s missing next Thursday?
Will I wake, alone, sense the absence of
rooster crow, my body between sheets – eggs
absent from pantry, and summon up hate
for fox? Whose hands held the axe on the verge?
Not mine, they’re dry, no evidence. The coop?

Lock up? Convert to vegetable patch? Coop
with cucumber, marigolds on the verge,
pumpkins like perfect golden suns. Thursday-
time: a battery-driven clock which speaks of
bed-making rituals, detergent, fox-hate
congealed on towels. No slow breakfast, no eggs

for cakes or child-delight. No scrambled eggs
on toast, no Sunday brunch, no walks to coop
with scraps – no clustering, dumb birds. I hate
the way soap-suds dry my skin - but verges
and cats crouch over their slack bundles of
feathers. It’s a white, black and white, Thursday.

No hens hoarding eggs. Silence verges on
the grasstrees, vacant coop. The silence of
the graveyard now, after the Thursday fox.

A Letter to my Chooks

Please don’t poop on the doormat.
When you wake at 4am –
and the moon floats
on a luminous cloud –
please don’t practise the lyrics
of your favourite songs.

My aspidistra was placed outside
for sunshine – not for you.
Your menu consists of laying pellets,
kitchen scraps and wheat.

The seat, my seat, situated outside
the front door, catches the first
of the morning’s rays. I enjoy
coffee and newspaper in that chair.
Please inform the rooster, the cocky one
with the crooked spur, not to perch there –
evidence is difficult to discover in the dark.

Yours faithfully seems a token gesture
when my fine new boots, and Levi’s , are wet
and pegged on the clothes line
in the moonlight.

I’ll mail this letter in the morning –
nail it, in fact – with recipes for à la King
and cacciatore, to the handle of the blunted,
rusted axe leaning against the woodshed door.

Posted by Barbara Temperton at 6:45 AM