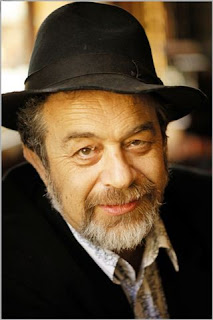 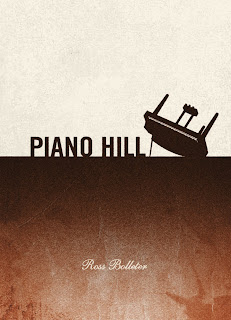 I’ve known Ross Bolleter for many years and I was delighted to be invited to launch his latest collection of poems Piano Hill, released this week by Fremantle Press. The launch took place at Caffissimo in Mt. Lawley last Friday 27 November. In addition to all the words present on the night, music was provided by Ross on one of his ruined accordians and the wonderful Sudanese group "Waza".


Ross is well known as a musician and composer. He is interested in many things, but summing them up briefly I’d say that his work demonstrates a preoccupation with the mysterious and with obsession.

Ross is concerned, like many poets, with the shape of words, lines, sounds, and images – and as a practitioner with a foot in both the worlds of music and poetry – his poems are evidence that language can do very different things to music.

In a recent conversation we had a delightful misunderstanding brought about by the sound of words. I have some hearing loss and the misunderstanding came about between what Ross said and what I heard. It was a lot like pressing a key on one of Ross’s ruined pianos or accordions and experiencing the difference between expectation and actuality. Ross quoted Ezra Pound to me. Pound said “Rhythm is form cut into time” but I heard “Rhythm is formed by the trapping of sound.”

When words go out into the world, who knows what the reader reads, the listener hears. It’s all part of the delicious mystery of reception and interpretation. I’m not a musician, but I am intrigued by the contrast between the concept of jazz as the ultimate in improvisation and the existence of a “jazz standard” that in essence remains unchanged. Like a jazz standard a poem in a book is no accident, no one-off rendition cum improvisation. Its patterns and structures are partly instinctual, part wrought by tradition and experience, and inscribed on our consciousness as much as they are upon the page.

The works in Piano Hill have been influenced by the traditions of haiku and its parent-form the ever-evolving form of Japanese poetry known as renga, their syllabic and line patterns varied and sometimes absorbed into larger structures. In the poems Galactic and At Cottesloe Beach, for example.

Piano Hill is populated by musical, meditative moments, and a few musical, rowdy ones as well! In music the measure is in the beat, in meditation it is the breath, and both these techniques are utilised in the structure of the poems in Piano Hill, regardless of content. In contrast to the deft manipulation of syllables, the breath - something which happens naturally, instinctually - only comes into consciousness when attention is focussed on it. The breath as a measure of line length endows these poems with a naturalness that is not easy to come by.


Ross has a gift for characterisation. From the moment I encountered the "arthritic angel" of Late Sonata - “hunched over the blue ravine”, her "hands / swallow diving into ivory" - I was hooked. Likewise, Adele the hairdresser At the Delly Barber who scavenges fresh flowers from the cemetery and lives in a haunted house.

The Bird Man whom the narrator encounters sitting in the sun opposite his run-down Northbridge house: “bricks / rubbed raw as a fresh graze, verandah posts / like split pegs, bullnose crusted with pigeons / that you fed each afternoon. Evenings, you heard / the scraping of their claws as they settled deeper / into your rusting roof.” The Bird Man, who for decades – according to rumour - has papered the rooms of his house with Real Estate agents’ offers, finally sells, is suddenly well-off, if not wealthy, only to be taken … suddenly! “You never knew what felled you, yet you barely fell - / just tilted stiffly forward still almost upright / amongst the startled pigeons.”

One mustn’t overlook the smiles in Piano Hill, and there are many, such as the gentle parody on imagery a’la William Carlos Williams in Spectacle “one white cereal bowl / on a green striped mat a red and white Saxa saltshaker / the margarine’s olive tub”.

Like imagery, sound works its way through all Ross’s poems, whether it is in their patterns, their structure or content. Cockatoos confabulate, “tattered palm fronds clatter” (At Cottesloe Beach), bees thump on windows, accordions leak, beds creak, girls shout, and always there are the pianos: “the chirrup of loosened strings” (Requitement), “the tiniest bing-plinking starlit note” (During the flood), thunder (Drought piano) the “clink clinank” of “jangling mysteries” (Morning rolls them in the foam). Equal emphasis is placed on silence “to make a spine of love” (At Cottesloe Beach) and “the raw plink of the stars” (Tonk).


The “old Zen teacher” of Those who only wait says “There’s no such thing as waiting – only a stretching of the heart towards / an embrace that’s not yet”.

In contrast to Piano Hill's focus on ruined pianos - instruments brought undone by age and exposure to the elements, and the spontaneous compositions wrought from their battered keyboards and strings - there is nothing improvised or ruined about Ross Bolleter’s poems. They are fine-tuned, highly crafted, demonstrating a refined, yet organic style.
Piano Hill is a new and exciting chapter in the life of a man dedicated to music and words. May it travel far.

Check out http://www.fremantlepress.com.au/books/newreleases/1122 for more information about Ross Bolleter and Piano Hill.


Posted by Barbara Temperton at 4:33 AM